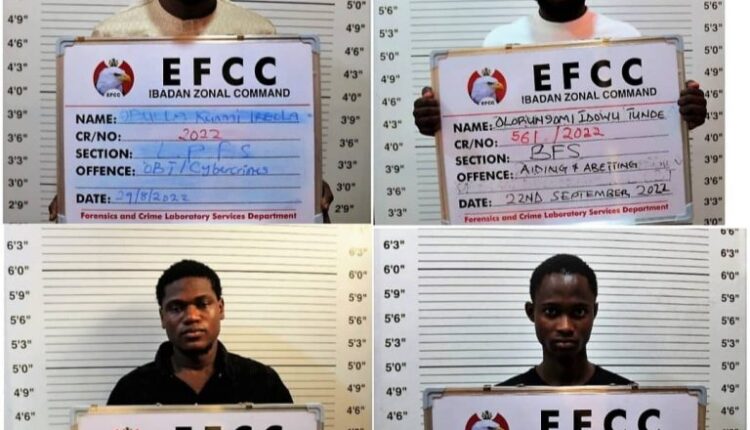 The Ibadan Zonal Command of the Economic and Financial Crimes Commission, EFCC, has secured the conviction and sentencing of seventeen internet fraudsters before Justices Bayo Taiwo, Ladoke Akintola, and Mohammed Owolabi of the State High Court, Ibadan, Oyo State and Justice Mosunmola Dipeolu of Ogun State High Court, Abeokuta, on a separate one count charge each.

This is contained in a statement by the commission’s Head, Media & Publicity, Wilson Uwujaren

The jail terms range from two to nine months community service, and one year in prison.

They all pleaded ‘guilty’ to the one count charge filed against each one of them by the EFCC.

Osundele was convicted and sentenced to one-year imprisonment while Arasi, Ganiu and Ibrahim bagged nine months jail term each.

Justice Bayo Taiwo ordered that Osundele Oladapo Daniel pay the sum of $16, 671. 00USD in restitution and forfeiting one white colour Toyota Venza car worth N7million to the Federal Government of Nigeria.

Other convicts were also ordered to restitute their victims and forfeit all items recovered from them to the government.

Hold Makinde Responsible For Any Election Misconduct In Ondo…