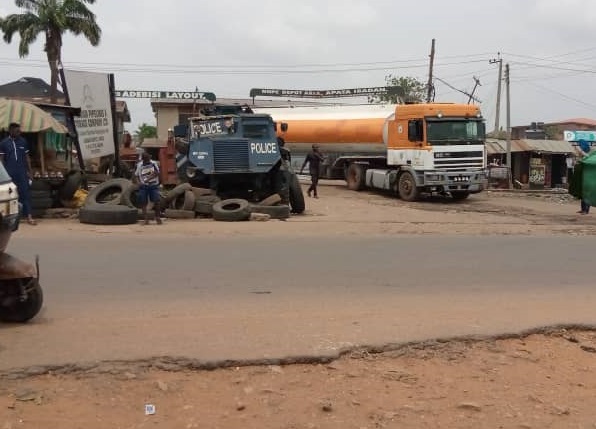 The office of the Commissioner of Police in Oyo State has been called upon to beam its searchlight on the alleged illegal activities of some policemen who usually operate at night at Nigerian National Petroleum Corporation, NNPC Junction, Apata, Ibadan.

Residents who spoke with Radio Nigeria said the police officers were fond of harassing commercial transport workers and other road users at night.

A source, who craved anonymity, said that late Thursday night, one of the three officers at the checkpoint was using a plank to break the headlamps of passing motorcycles who tried to evade their extortion net.

The source further explained that when a commercial motorcyclist whose headlamp had been broken by one of the officers attempted to ask questions to justify why the headlamp was broken, another officer cocked his gun and threatened to shoot him.

The residents implored the office of the police commissioner to take prompt action to prevent the breakdown of law and order.

Recently, the Assistant Captain of Remo Stars Football Club, Tiamiyu Kazeem, known as “Kaka” was allegedly killed by actions of a SARS official.

Efforts to reach the Oyo State Police Public Relations Officer, PPRO, Mr Olugbenga Fadeyi proved abortive as he did not respond to either calls or text messages sent to his mobile phone.