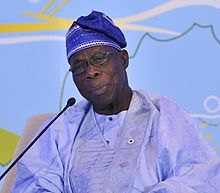 If APC Leaders Are Probed, They Will Be Thrown Into Hell – Obasanjo

Chief Olusegun Obasanjo again in less than 48 hours spoke cheap of leadership of All Progressive Congress said if the APC leaders are probed now, they will not just be jailed but thrown into hell if their records is examine. The former president also criticised President Buhari’s alleged ethnocentric appointments

He said if the president did not trust people from other ethnic groups enough to give them appointments, he should also not ask for their votes in the coming elections.

: “If we are talking about sin, the people that are there now, if we examine them, they will all enter hellfire.

“They will not just be jailed, they will enter hellfire. Whoever God covers his sin, the person’s secrets are also protected.

“I did not say if Atiku (Abubakar) gets there he will behave like Jesus or Mohammed, but he will do better than what we are seeing now.

“The person who is our leader now is saying he cannot allow another ethnic group to work with him because he cannot trust them. If he cannot trust my tribe or your tribe, of what benefit is he? And he is saying my tribe and yours should come and vote for him.

“He can ask for our votes, but he cannot trust us to work in good positions. Life is give and take. If you cannot trust me, why should I trust you?

“If you put me in a position and I misbehave, why not remove me and put others?

“But those you are putting in positions are your tribesmen and kinsmen because they are the people you can trust.

The former president claimed President Buhari “is sick in the spirit, body and soul.” He pleaded that Buhari needed rest so another person could take charge of the country.

Owode Yewa Youths On Rampage, Vows To Kill Any Customs Officer At Sight