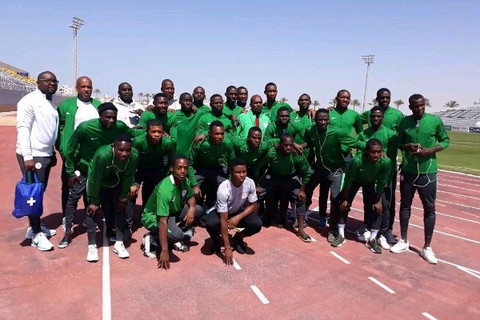 The Flying Eagles are expected to leave Nigeria for the U-20 AFCON on January 29.

The Flying Eagles that will represent Nigeria at the U-20 AFCON have been selected
Flying Eagles of Nigeria head coach Paul Aigbogun has released a 21-man list for the upcoming Africa U-20 Cup of Nations.

The Flying Eagles are reportedly in camp preparing for the tournament and the coach has now decided on the players he will take to the competition.

According to reports, 30 players were in camp and 21 were selected to the Confederation of Africa Football (CAF) before the deadline set by the Africa football governing body.

The Flying Eagles were scheduled to face off with Saudi Arabia in an international friendly but has now been cancelled.

The Amaju Pinnick led Nigeria Football Federation (NFF) however stated that the friendly encounter will still hold but the organizers have postponed until after the U-20 AFCON.

Aliyu Ibrahim Lawal, who is the team coordinator for the Flying Eagles stated that they followed due protocol in submitting the list and confirmed that the team will travel to the host country on Tuesday, January 29.

He said, “The list has been submitted and will be sent to CAF ahead of Tuesday’s deadline for the submission of final squads. Our delegation is departing Nigeria for the Niger Republic on Tuesday next week.”

The Flying Eagles will play their first game against the Junior Itamba of Burundi on Saturday, February 2.

If APC Leaders Are Probed, They Will Be Thrown Into Hell – Obasanjo