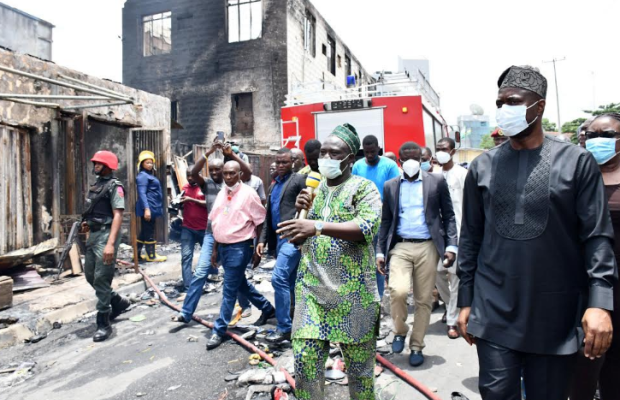 Oyo State Governor, Engr Seyi Makinde, has visited the scene of the fire incident that razed some shops in Dugbe market, Ibadan, on Wednesday, April 15, 2020.

Governor Makinde, who was accompanied by a number of Government officials, on Thursday, April 16, 2020, told the victims and a crowd of sympathisers, who had converged on the location to possibly salvage remnants of their wares, that the State Government would launch an emergency fund to address disasters and emergencies.

According to a statement by the Chief Press Secretary to the Governor, Mr Taiwo Adisa, Governor Makinde commiserated with the victims of the Dugbe inferno and promised to get to the roots of the incident.

The Governor, who described the incident as unfortunate and heartbreaking, maintained that the State would find means, despite the challenges occasioned by the COVID-19 pandemic, to give palliatives to those that were affected by the inferno.

He said at a time the State is still fighting to contain the COVID-19 pandemic, such an unfortunate occurrence like the Dugbe fire disaster was surely going to overstretch the State Government.

Governor Makinde admonished shop owners and residents of the State to always apply precautions and safety measures within their environments so as to avert unforeseen circumstances.

Earlier, the South-West Zonal Coordinator of the National Emergency Management Agency (NEMA), Mr Silaku Lugard had told the people that NEMA would liaise with the Federal Road Maintenance Agency to do an assessment of items lost and provide the necessary assistance for the victims.

Also speaking during the Governor’s inspection tour, one of the major victims, Mr Dapo David, said the major cause of the inferno was not yet known, contrary to speculation going round that it occurred while a welder was working on partitioning one of the shops.

Mr David said: “Concerning the cause of the incident, people will say all sorts of things, don’t mind them. No welder will come here without my consent, even the tenants. We cannot say specifically the cause of the fire outbreak. Most of the shops were under lock, as a result of the COVID-19 lockdown, that caused the high rate of destruction. If the shops were not locked, it would not have been much. On what we have lost here, they are not quantifiable for now.”

Oyo State School-On-Air: Airtel To Give 500MB Data To Each…