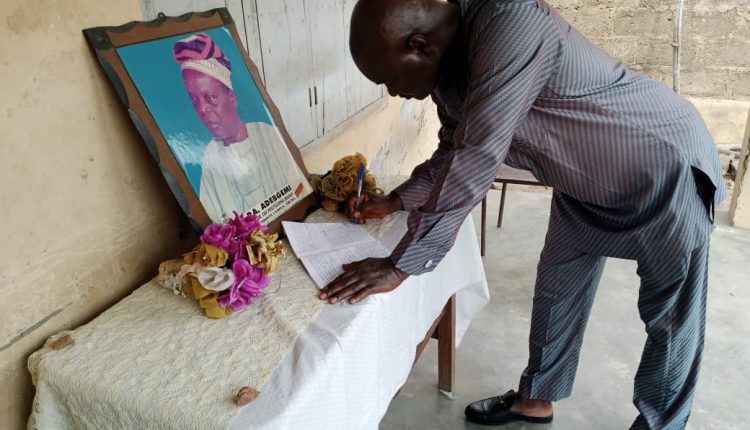 The condolence visit had in attendance, the Ag. Rector of the Institution, Dr. Gbade Akinteye, The Ag. Registrar, Mr Dele Oladipo, Head of Library, Mr S.T. Iyanda and Head of works and Services, Mr Sola Abegunde.

During the visit, The Management team sympathised with the family and described the late Pa Adegbemi has a man of positive impacts. Condolence letter was submitted to the family of late Pa Patrick Adegbemi.

In a Condolence Letter Issued and signed by the Ag. Registrar, Mr Dele Oladele, ” On behalf of the Governing Council, Management Board, Staff and students of Adeseun Ogundoyin Polytechnic Eruwa, I write to Commisserate with the entire family of late Pa Patrick Aderoju Adegbemi, who was the former Director of the defunct Adeseun Ogundoyin Campus of of the Polytechnic, Ibadan.”

“Baba was a seasoned Administrator and a great leader, He contributed immensely to the development of our institution, His positive impacts can not be easily forgotten, We pray that the good Lord will give the entire family, political class, Igangan Community and Ibarapa at Large the fortitude to bear the irreplaceable loss. May his memories remain evergreen.” the letter concluded.

The condolence letter was received by Mr Adegbemi Felix, on behalf of the entire family of late Pa Patrick Adegbemi.