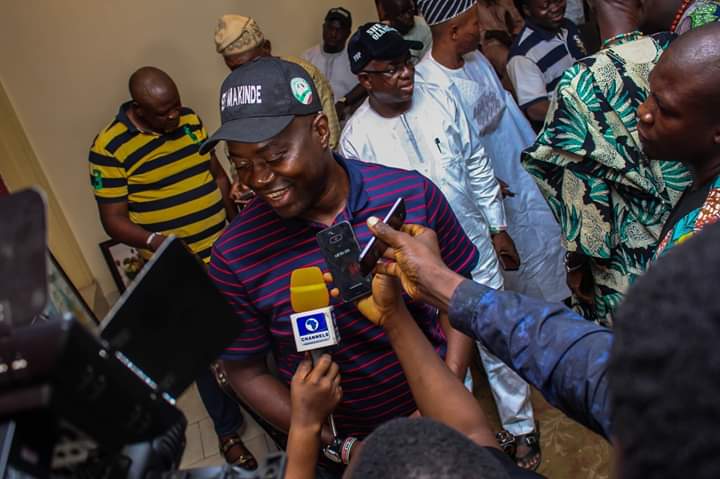 Makinde was declared winner of the March 9 governorship election by the Independent National Electoral Commission (INEC).

The Peoples Democratic Party (PDP) candidate was declared governor-elect of Oyo State after results were collated from 33 Local Government Areas (LGAs) of the state.

Makinde scored a total of 515,621 votes to beat Adebayo Adelabu, his closest rival and candidate of the All Progressives Congress, who polled a total of 357,982 votes.

Olufemi Lanlehin, candidate of the African Democratic Congress (ADC), came third in the governorship poll with 12,375 votes. Although Lanlehin had stepped down his candidature to support Makinde a few days before the election.

Makinde won convincingly in 28 LGAs of the state, while Adelabu won in only five LGAs, amid allegations of electoral malpractice.

A SaharaReporters correspondent, who monitored the elections in Oyo, reported that the election was marred with intimidation perpetrated by sponsored political thugs.

Specifically in Ward 3 of Irepodun LGA, there was violence during the Saturday election as materials such as the ballot boxes and Smart Cards Readers were destroyed and carted away by armed thugs.

Although, journalists and observers witnessed violence in some areas, many INEC officials who reeled out results at the collation centre claimed the elections went on smoothly and without hindrances.

Oluwatoyin Temitayo Ogundipe, the INEC Returning Officer, declared the final result on Sunday at the headquarters of the INEC located on Agodi road.

Ogundipe, who is also the Vice Chancellor of the University of Lagos, announced Makinde’s victory saying: “That Seyi Makinde, having satisfied the requirements of the law and won the highest number of votes is hereby declared winner and returned elected.”

Speaking after the announcements of the results, Mutiu Agboke, the Resident Electoral Commissioner (REC) in Oyo State, said the governorship and house of assembly elections was “successful” due to the help of all the stakeholders in the electoral process of the state.

Agboke, however, added that the commission would continue to do its constitutional duty no matter the act of intimidation and harassment of its staff members.

“No matter the level of intimidation and harassment, INEC will continue to do the right thing concerning the voters and election in the state,” he said.