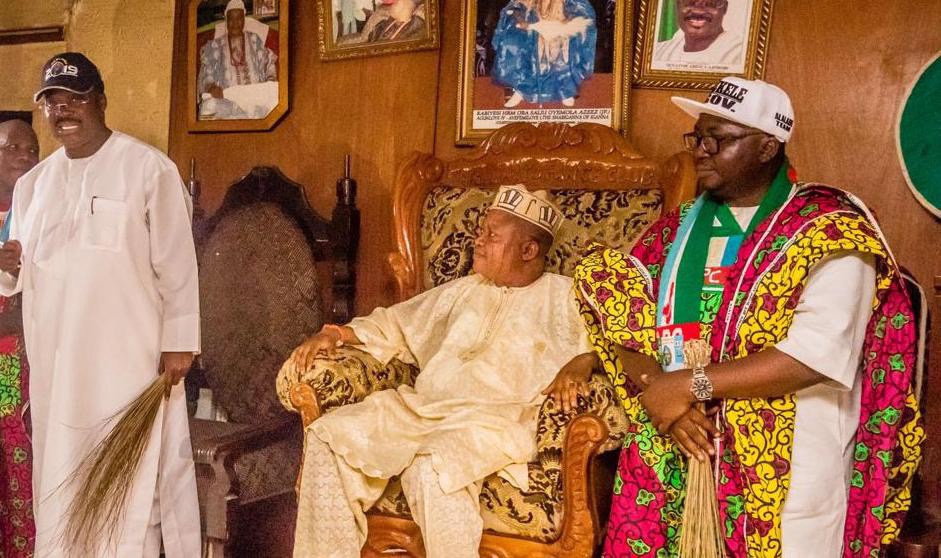 Oyo State Governor, Senator Abiola Ajimobi, has solicited the support of traditional rulers and citizens of Oke Ogun for the All Progressives Congress, as the party rounded off its three-day road shows and campaign rallies to the zone, on Friday.

The governor said that his administration had kept faith with the people of the Oke Ogun since 2011, promising that the APC would do more for the zone if its governorship candidate, Chief Adebayo Adelabu, was elected into office.

Ajimobi, who is the APC candidate for Oyo South Senatorial District, had led the campaign trail of the party to the axis from Wednesday to Friday, touring all the 10 Local Governments and Local Council Development Areas (LCDAs) in the process.

At each stop, he had also canvassed support for President Muhammadu Buhari, Adelabu and other candidates of the party in the forthcoming general election.

Addressing the party’s supporters in Igboho, the governor said that the next administration would further harness the agriculture potential of Oke Ogun in the furtherance of the APC agenda to make the zone the food basket of the country.

He used the opportunity to clarify that his administration did not owe any member of the State House of Assembly a dime in salaries and allowances, just as he labeled the opposition Peoples Democratic Party and their ilk as band of liars.

The governor said that the clarification became necessary to put the lie to claims by some opposition lawmakers from the area that they were being owed allowances.

From the inception of his administration Ajimobi said that he had ensured prompt payment of salaries and allowances to all cadres of workers, except during the recession period when there was paucity of fund across the country.

The governor appealed to the people of the area to vote for the APC candidates in the coming election and dump politicians and lawmakers who waited for the campaign period to give excuses for their poor performance in office.

Ajimobi said, “I want to appeal to our royal fathers and the people of Oke Ogun to vote for the APC in the forthcoming election. I have kept faith with Oke Ogun and Adelabu, who by the grace of God and your supports will succeed me, will move this zone to the next level.

“A vote for President Muhammadu Buhari will also be a vote for the rapid development and harnessing of the great agric potential of this zone. With the solid foundation already laid by the APC, I can assure you that the next four years will be prosperous for all.

“I want to quickly debunk a misinformation being peddled from the camp of the PDP and their ilk that our administration has not paid the incumbent honorable representing Oorelope constituency his entitlements and dues.

“I heard he claimed he could not do projects because his late predecessor had been paid all the entitlements accruable to the constituency. I want to state categorically that this claim is a lie from the pit of hell.

“The honorable has been collecting all monies due to your constituency, even the vehicle that is supposed to belong to the late member was given to him. We have been fair to him. So why is he lying to you at home?

“I am the one approving their dues and allowances and I’m saying authoritatively that he has been paid all that is due to the constituency. It is now left to you, his constituents, to make amends by voting him out. The PDP is a den of liars from top to bottom and you all know it.”