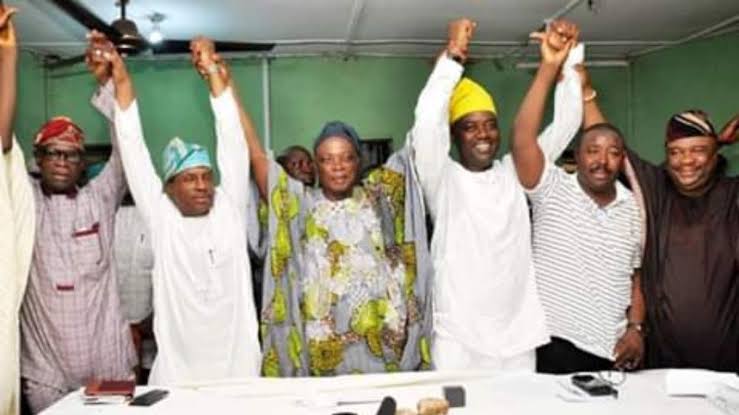 Governor Oluseyi Makinde, the beneficiary of March 5, 2019 collation parties agreement on Friday night promised aggrieved parties to make adjustments in areas where things have been perceived not to have been well handled.

Seyi Makinde in Oyo State was said to have visited Senator Ladoja in his home last week, implored him to call a meeting with the collation parties in order to create an effective communication to sort out what is seen as misunderstandings.

On Friday, the leaders of the coalition met behind closed-door in Ibadan, the state capital, at the residence of a former governor of the state and leader of the coalition, Senator Rashidi Ladoja, the meeting began at about 9:45pm and ended at past 2:00am on Saturday morning.

The aggrieved side, represented by
Senator Olufemi Lanlehin, African Democratic Congress governorship candidate in the 2019 election; Chief Sharafadeen Alli, Zenith Labour Party governorship candidate; and Chief Bolaji Ayorinde, Social Democratic Party unable to hide their unjust treatment of their party by governor Makinde whom he and his party People’s Democratic Party ( PDP ) benefited and now having the whole gains of the coalition result.

It will be recalled that, Lanleyin, Sarafa and Ayorinde surrendered their mandates to support Makinde, who won the election with a large margin, in order to prevent the then governing All Progressives Congress (APC) from succeeding itself in the state.

The trio were said to have expressed disgust at how they were treated in the scheme of things, saying their siddon look attitude about the government was necessitated by how the governor has handled the coalition agreement so far.

They were said to have made the governor see the need for the coalition to remain intact and its members bonding with him.

Responding to the remarks by Lanlehin, Alli and Ayorinde, the governor was said to have pleaded with them and promised to make adjustments in areas where things have been perceived not to have been well handled.

It was gathered that Governor Makinde assured the coalition partners of a fresh start and sought better communication on the knotty issues threatening the coalition.

After a long deliberation, it was agreed that Governor Makinde and Senator Lanlehin should meet to agree on what will be done to pacify those who are displeased.

Source close to one of the coalition leaders hinted Westerndailynews that another intense meeting for the parties will be held few weeks time.