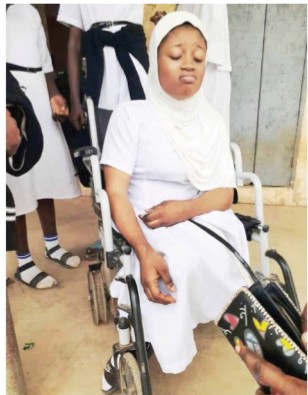 She is a victim of a quack doctor.  She is on a wheel chair, having been allegedly crippled when she was only three years old by a medical doctor who carelessly injected her on a vein. Sounding quite intelligent, 13-year-old Fathia Oladeji is an epitome of beauty. With her laudable academic performance, she is the dream child of every parent. She had five distinctions in her primary school leaving certificate and the hopes of the entire family about her further studies had been high, despite her physical disability. But then, dreams can die fast. can’t they?

The family members have been in sorrow since the beginning of the year. Fathia’s father, who had borne the burden of educating and taking care of her generally, suddenly collapsed on December 27, 2019 and became paralysed. And now, it’s her mother, Monsurat, who is the only hope for the family’s survival. She cares for the entire family. She daily backs Fathia to school, as well as cares for her husband and the three other children in the family. She told Eko Trust that at this stage, she sometimes feels like giving up, adding but she knew she cannot.

Fathia, according to her parents, loves education. She is presently at the Government School of Science, Pade, Ibadan. Even on her rickety wheel chair, she, at her young age, occasionally calls radio stations demanding for help.

Our correspondent who came across Fathia and her mother at a function organised for the less privileged by a group in Ibadan, the Oyo State capital, and later visited their family house on Akala Road, Ilubusi Estate, Odo Ona-Elewe, New Garage, Ibadan, reports that the family’s situation was, indeed, pathetic and disheartening.

“The only song she sings all the time is that she wants to find her way out of Nigeria,” her parents and siblings said, with her father, from his own sorry condition, adding, “she is a loving and caring child.”

As Fathia’s mother narrated, she and her husband discovered the little girl had temperature when she was three years old.

She said, “We took her to a clinic, close to our house. The doctor diagnosed her for malaria. He injected her and admitted her for treatment. The temperature subsided that night but we never knew it was the beginning of her problem. A few days later, we discovered that her two legs were shrinking; she could not walk again.

“That was when we started taking her from one hospital to another. We spent millions of naira on her condition at the University College Hospital (UCH), Ibadan, because my husband was financially okay at that time. But after all our efforts, my baby has remained crippled. She can’t walk, but we know she is very intelligent. She loves education and wishes  to travel out of Nigeria.”

Fathia, who was away at school when our correspondent visited her family house, spoke with him on the telephone.

“I have accepted my fate as a cripple. Who are we to question Allah? But my concern is how to move on with my life. Government should make Nigeria more conducive for those of us with special needs. My dream all the time is to have good education and travel out of the country to study Medicine. I know I am up to the task by His grace. How I wish I wasn’t born in Nigeria,” she lamented.

Fathia’s mother said the family’s problem was compounded last year when her husband lost about N3 million in his clothing business, which she said explained how he collapsed at a point and eventually became paralysed.

She said, “We were selling clothes at Gbagi market. Then he lost N3m to the business. We encouraged him to move on with his life, but he never listened. That night, he left the room for the toilet. When he got to the exit door, he collapsed and, as a result, became crippled.

“Since then, we have spent at the UCH all the money he had. His mouth has now been straightened and he can talk reasonably. But he can only manage to eat, as you can see. There remains the problem of his legs because he still cannot walk. We have nobody except God,” Monsurat said.

Mr Oladeji, saying he wasn’t really bothered about his own condition, expressed great worry about his children, especially Fathia. He said,

“Fathia is my first child. She is so intelligent and supportive. I wonder why she is going through such challenges in her life. Anybody who needs to support me should help me support Fathia. I know she won’t disappoint my family. Aside individuals, government can as well come to our rescue. We need support,” he appealed.

Oyo Govt. To Partner Technologists To Curb Building Collapse In The State

How Gov. Makinde Okayed Southwest PDP Congress To Be Moved…