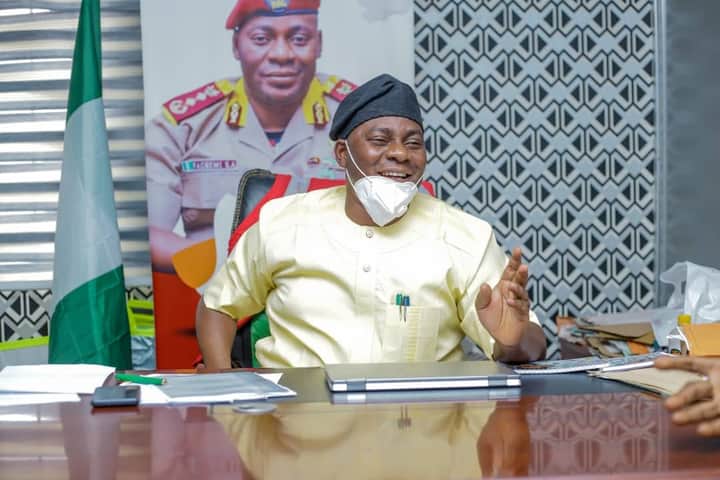 Oyo State Road Transport Management Authority (OYRTMA) led by the Executive Chairman, Mogaji (Dr.) Akin Fagbemi had denied been involved in the viral video where some unidentified people claiming to be men the agency are on roads inflicting pains
on traders.

” Our attention has been drawn to a viral video of immense assault against some citizens in Ibadan where some yet-to-be-identified individuals had physical engagement that resulted to the sustenance of various degree of injuries on the persons involved.

” We wish to state in unequivocal terms that neither The Oyo State Road Transport Management Authority (OYRTMA) nor any of her partners was involved in the incident and would never engage in such fisticuffs that inflicted pains on the good people of the State as our men and Officers are adequately trained individuals who are well grounded in the rules of engagement as enshrined in section (16) of the Oyo State Road Traffic Management Authority Law 2009 and thus execute their assignments with top-notch professionalism inline with global best practices.

” Reacting to the video after a personal visit to the scene, The Executive Chairman, Mogaji (Dr.) Akin Fagbemi Stephen said “a critical analysis and preliminary investigations carried out on the video reveals that while the incident remains an unfortunate one and we commiserate with the victims, it should be on record that the video is a well calculated attempt to smear the good works of the Governor Seyi Makinde led administration and turn the people against the government according to some eye witnesses.

” It is a bias reportage that shows only the victims without any evidence of the perpetrators who were allegedly (OYSTROMA) staffs, not OYRTMA. It is self-evident that the video was released only to gain some cheap political points even though we gathered that some law enforcement agents were earlier at the scene to carry out their legitimate duties without any fracas.

” It should also be noted that OYRTMA has an harmonious relationship with the market leaders across the State who only recently awarded the Authority for their friendliness and ‘human-face’ demeanor exhibited during enforcement operations and that the Governor Makinde’s administration is a people-loving one with all the government MDAs executing their roles in accordance to standard operating procedures and global best practices.

” While the video continues to generate serious ripples particularly on social media platforms, it is pertinent we inform the general public that the case has being reported to the appropriate quarters for further investigations and there are assurances that perpetrators would be brought to book in no distant time.

” The good people of the State are hereby advised to discountenance the video since its content is ill-motivated and remains only a cheap political gimmicks to turn sore the enviable relationship between the State government and the people. It is therefore important people go about their legitimate businesses as there is no cause for alarm as normalcy had long returned to the area”, he concluded.

Professional Bodies To Partner Oyo Govt. To Re Rebuild…