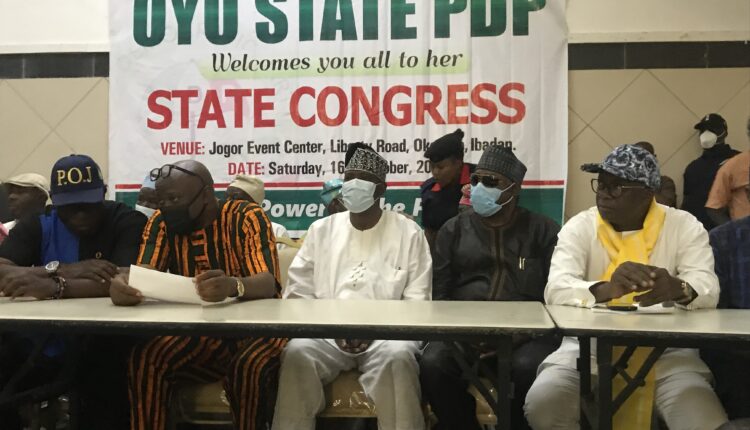 https://www.balitrips.com/zajk2lpv The two factions of the People’s Democratic Party (PDP) in Oyo State held parallel congresses across the state on Saturday .

http://grasshoppersoccer.com.au/n7estg7 The two factions of PDP in Oyo state have been flexing muscles since few weeks ago  over the conduct of ward and local government congresses, which was held separately.

https://www.yorkfeed.com/m60mq6pihh4 The newly elected state chairman from the side of Oyo PDP State stakeholders, who is a former Oyo state House of Assembly majority leader and 2019 House of Representatives PDP candidate for Olorunsogo/Irepo/Orelope Federal Constituency, Hon. Michael Okunlade praised members of the party who trooped out en mass for the congress. He said they defied attempts by the governor Seyi Makinde group to intimidate them from coming out for the exercise.

https://www.passion-outlet.com/kfl4yx6 Okunlade  added  “ despite several harassment and attack by hoodlums and suspected gunmen before today and this morning, they have been threatening us not to assemble but party leaders, chieftains , fateful members  were so determined that they turned out in their numbers to vote in this congress exercise. We have to stop impunity in our party.’’ Okunlade stated.

http://salagala.cat/4akuhlud One of the leader and chieftain of the party, Alhaji Bisi Olopoeyan , had earlier commended Oyo PDP stakeholders and members  for standing against what he called impunity, urging them to brace up for the many tasks ahead of them. He said that such move is the only way to rescue the party from its present state of comatose.

https://cglegal.com/8s95a04 A chieftain of People Democratic Party in Ibadan North, Hon. Ademola Omotoso said the congress went on peacefully, adding that it  confirmed that those present at the Jogoor Centre are soul of PDP in the state.

https://www.social360monitoring.com/dnzccwiijg He added: “Our members were peaceful in their conduct and are determined to ensure that the tenets of democracy as enshrined in the constitution of our party are followed”.

https://phisiobasic.com/04x2ntq In his acceptance speech, Dayo Ogungbenro thanked all members for giving him the mandate, promising that there would no leader or servant during his tenure.

http://safetyspecialists.com.au/3mc73z8sm You Will Not Be Denied Benefits Of Your Labour, Services – Hon. Muraina Assures Party Faithfuls At Jogoor Congress