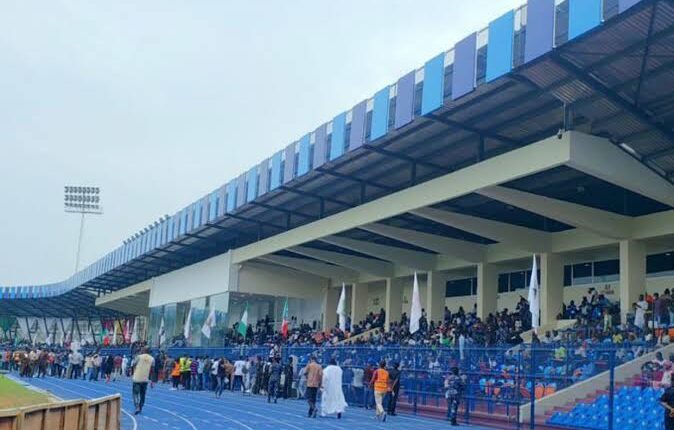 Pandemonium erupted yesterday during the commissioning of the newly remodeled Ademasingba Stadium in Ibadan, as one of Oyo state executive local government chairman, Hon. Saheed Arowosaye popularly called Arosad traded  blows with one of the Security Bodyguards at the entrance of the stadium mainbowl.

A fight started when the Security Bodyguard assigned to monitor one of the  entrances that lead to the mainbowl stadium stopped Hon. Saheed Arowosaye AROSAD who is the executive chairman of Oyo East Local Government and his fellow chairmen to question them their identities before allowing to walk through the newly laid Tartan Track to the state box.

Arosad was said to have made the first attack by slapping the Security Bodyguard who was trying to know him and his other chairmen identities.

According to information gathered, Arosad claimed the Bodyguard pushed him and moreso has no right to question him nor other chairmen’s identities and movement in the stadium since he can see them that they are in group and on uniform Jersey.

With information gathered by westerndailynews from an eye witness, it was said the Security Bodyguard returned the slap for the local government chairman before it resulted in exchange of blows.

Eye witness said  “ the chairman, Arosad was too harsh on the security guard, the guy didn’t do anything wrong before Arosad gave him the dirty slap, all he was doing is to prevent people from entering the main field and waking aimlessly on the Track, my friends and I sits close to the entrance and we have been watching how the security guy maintaining orderliness and preventing ordinary people from walking on the Tartan Track of the stadium, it just unfortunate that when the chairmen came into the stadium, they walk through us here and try to enter the main field in order to walk on the Tartan Track through to the state Box.

The fight lasted for about five minutes in the presence of the executive governor of Oyo state, Seyi Makinde and dignities like former vice president Atiku Abubakar, the Edo state governor, Governor Godwin Obaseki, Senator Olubunmi Olujimi, formal Oyo state Governors, Senator Rasheed Ladoja, Otunba Alao Akala and other PDP leaders who were all invited to commission the remodeling of the Lekan Salami stadium.

To get his reaction, Westerndailynews correspondent made several attempts to speak with Hon. Saheed Arowosaye Arosad, the executive Oyo Oyo East local government chairman but all effort to reach him proved abortive as his mobile number not connecting.

We Established Operation Amotekun To Narrow Gaps In Security…

I Will Continue To Criticise Buhari, I’m His Boss…