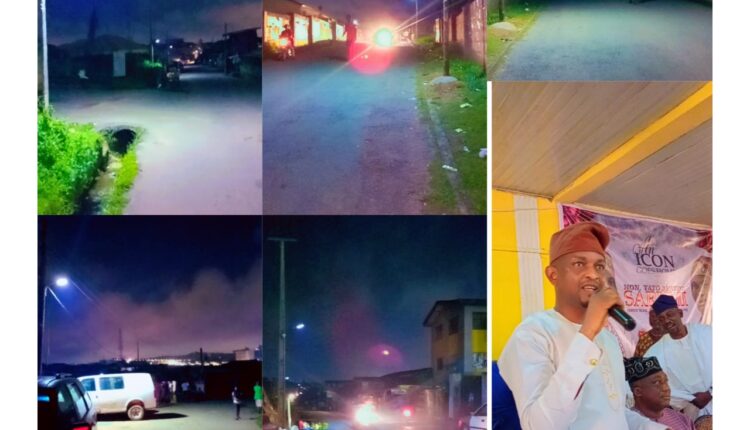 It was reported few weeks ago how the lawmaker, light-up some major streets within his constituency.

Oyekunle, who is the campaign Director General of governor Seyi Makinde in Ibadan North Local Government and also the Chairman, House Committee on Youth, and Sports installed the streetlights across wards 4 and its environs had the residents shower praises on the lawmaker stating it was long overdue, as criminals have taken advantage of the dark areas for year’s

DON, said that the project would enhance security and tackle socio-economic challenges of the people, considering the importance of light to human and societal development.

He noted that Sapati, beere and other communities of the constituency had earlier benefited from the installation of 50 streetlights, while oke Apon all through ile Oke got over 50 streetlights also

“I have decided to install the streetlights to reduce the security challenge of my constituents,” he said, he, however, enjoined the benefiting communities to safeguard them jealously in their interest and for the overall development of their respective areas.

He also urged communities that are yet to benefit from the project to be patient, while expressing his determination to extend the gesture to them.“The project will be in phases and will cut across other areas that have not benefitted from the first phase,” he added.

Oyekunle assured the people of his constituency of quality representation that would improve their standard of living.

He solicited continued support and prayers from all and sundry to enable him to succeed in the task ahead. Besides, the lawmaker called on the people of his constituency and the state at large to continue to support Governor Seyi Makinde’s administration and come out massively to vote for all the PDP candidates vying for one elective position or the other.