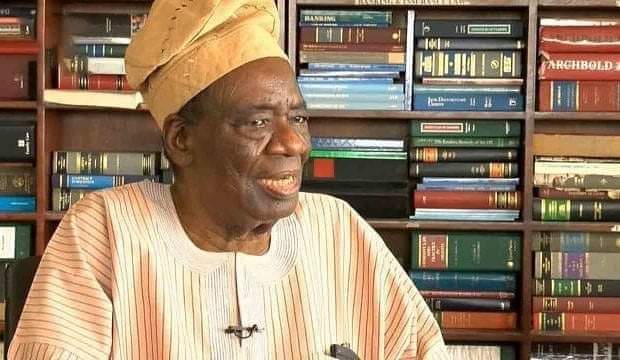 Oyo Has Lost A Gem, Shining Light In Akinjide—makinde

Oyo state governor, Engineer Seyi Makinde, has described the demise of the Second Republic Attorney-General of the Federation and Minister of Justice, Chief Richard Akinjide (SAN), as the end of an era and a huge loss to Oyo State, the legal profession, the Federal Republic of Nigeria and indeed, the world at large.

Governor Makinde, who also described the demise as the loss of a gem and a shining light, said that he was saddened by the demise of the foremost legal luminary.
The governor, in a condolence message made available through his Chief Press Secretary, Mr. Taiwo Adisa, described Akinjide as a legal luminary who served his state and country to the best of his ability.

He maintained that the former minister’s death came at a period that his wealth of experience and robust versatility in history, politics and law was needed to offer direction to the current generation of Nigerian leaders.

The governor said: “The news of the death of our father, leader and one of the last men standing among the foremost politicians of the country, Chief Richard Akinjide, came to us as a shock.

“This is because Baba, for those who know him or has seen him in recent time, did not shown any sign of slowing down; he continued to lead intelligent and history-laden conversations, offered golden advice on governance and leadership and remained a great pillar of experience in politics and law.

“His death, no doubt, is a huge loss to Oyo State, Nigeria and indeed, the world, because he was an exemplary indigene of Ibadan and Oyo State; a detribalised Nigerian, who served the country to the best of his ability and a citizen of the world.

“We have lost a gem and a shining light in Baba Akinjide. I commiserate with my sister and chieftain of our party, the Peoples Democratic Party (PDP), Oloye Jumoke Akinjide and the rest of Baba’s biological and political children.

“I condole with all indigenes of Oyo State and Nigerians on the exit of a giant of Akinjide’s standing.”

Oyo PDP Aggrieved Passes Vote Of No Confidence In Makinde,…