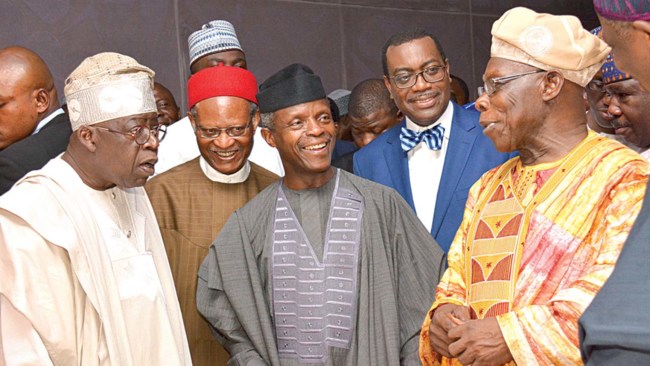 Obasanjo Is A Specialist In Election Rigging, Now A vociferous complainant – Tinubu

The National Leader of All Progressive Congress ( APC ) has again hit hard on Ex president Olusegun Obasanjo less than 24 hours of replied to his letter castigating president Muhammad Buhari of trying to rig the 2019 election.

his response to Obasanjo’s letter on Tuesday, January 22, Tinubu, co-chair of the All Progressives Congress presidential campaigns, said Obasanjo was projecting on to the APC the misconduct he would perpetrate if still in power.

Tinubu called Obasanjo an election rigger who does not have a rival.

“Yet, the ways of Obasanjo are not those of the APC. And this difference has meant the better for Nigeria.

“There is no election which occurred under Obasanjo’s watch or in which he participated that did not involve cheating on his part. Even the late President Umaru Musa Yar ‘Adua admitted he was the beneficiary of a flawed election engineered by none other than today’s vociferous complainant,” Asiwaju said.

Read the full reply from Tinubu below:

CHIEF OBASANJO – AT WAR AGAINST HIS OWN DEEDS.