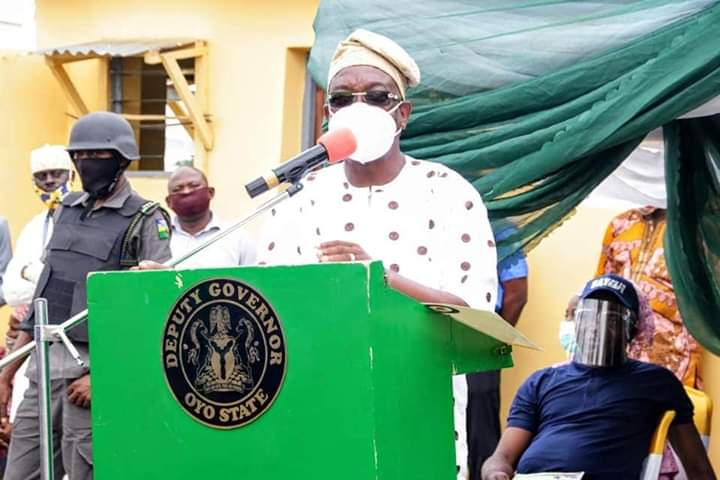 …says ‘we are committed to revamping Health Sector’

Oyo State Governor, Engineer Seyi Makinde, on Friday commissioned another COVID-19 Isolation Centre in Awe, AFIJIO Local Government Area of the State, where he declared that his administration’s goal of revamping the Health sector remains unshaken.
The governor, who was represented by his deputy, Engineer Rauf Olaniyan, stated that the current administration in Oyo was set to remodel health facilities in all the nooks and crannies of the state.
A statement by the Chief Press Secretary to Governor Makinde, Mr. Taiwo Adisa, further quoted the governor as saying that the commissioned Awe Isolation Centre was a testament to the government’s commitment to mitigating the impact of COVID 19.
According to him, the centre would cater for the well-being of the citizens and residents of all the four local government areas in Oyo town.
The governor, therefore, called on all relevant stakeholders to collaborate with the government to ensure a world class service in healthcare delivery.
The statement quoted the governor as saying that the isolation centre was modelled to the standard of a cottage primary health centre and that it will be made to serve the purpose once the virus is defeated.
He added that it is part of the effort to revamp the dilapidated healthcare machinery in the state, saying the isolation centre is necessary to curb the spread of the virus among the people in the community.
Governor Makinde further stated that contact tracing and active case searching have been set in motion, even as he encouraged citizens to take responsibility and necessary precautions while adhering to the COVID 19 safety protocols.
Speaking earlier, the Commissioner for Health, Dr. Bashir Bello, said that plans are ongoing to site isolation centres in all parts of the state, especially in Ogbomoso, Oke-Ogun and Ibarapa.
According to him, after the first confirmed case of the virus in the state, the Olodo Infectious Disease Centre and the Agbami Isolation Centre have both been commissioned to aid the state’s COVID-19 containment efforts.
The member representing Afijio State Constituency in the Oyo State House of Assembly, Hon. Seyi Adisa, who also spoke at the event, appreciated the efforts of the Seyi Makinde-led administration for not leaving the place to lay waste because according to him, the structure has been deserted for years since it was built in 2004.
The lawmaker said successive governments have since then made efforts to revamp the place but could not follow through till the end.
Also speaking, the head of the Technical Working Team of the Oyo State COVID-19 Task Force, Prof. Temitope Alonge, said some of the facilities in the hospital include oxygen concentrator and nebulizers alongside all the basic amenities like uninterrupted power supply, running water and Personal Protective kits for workers.
Signed:
Taiwo Adisa
Chief Press Secretary to Governor Seyi Makinde
July 17, 2020.

Show Up Your Interest On Sole Ownership Of LAUTECH, Osun…