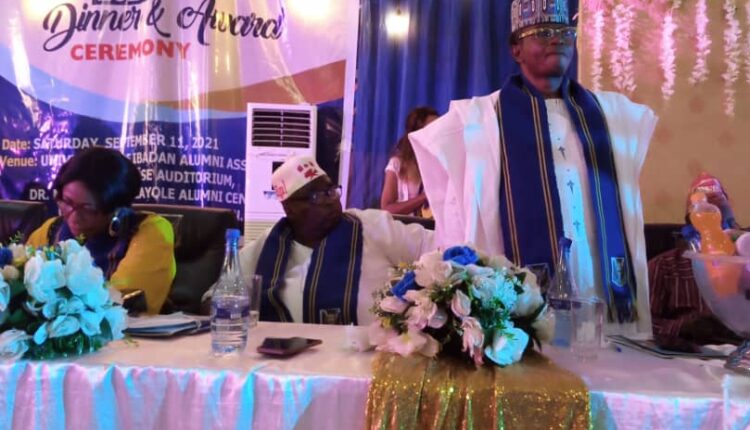 University of Ibadan alumni association, Oyo state branch has honoured a chieftain of the all progressives congress in Oyo state, Dr Fola Akinosun with an award of humanitarian service in recognition of his dedication to mankind.

Dr Akinosun was selected and awarded by merit as the only awardee in humanitarian category alongside other notable Nigerians who are making impact in different facet of life, including traditional rulers, captains of industries and experts in the academia.

Professor Adewoye who showered encomium on Dr Akinosun in recognition of his unrelenting support, especially to the less privileged and vulnerable, described the Oyo south senatorial hopeful as God sent to humanity.

Also speaking, Oyo state chairman of the UI Alumni association, Mr bello adetokunbo said Dr Akinosun’s philanthropic gesture and his contributions to the education sector through his scholarship programmes distinguished him for the award.

He said the award was based on merit and to encourage the award recipients to do more.

Responding, the grassroot politician and Ibadan born Chief Executive Officer, Dr Fola Akinosun appreciated university of Ibadan alumni association for recognizing what he described as his little way of giving back to the society.

He said ” I’m not really any better than other people, i only have grace of God, This award today is dedicated to humanity. It is not because I’m wealthy, no, it is because of my passion to see people smile and I will not stop impacting lives positively, many Degrees are not worth the award ; it’s only normal to go to school for self development, and working for so many years earning salary is not worth an award either.  I thank God I’m able to impact lives”.

The agbaakin of Iroko however reiterated his commitment to touching lives positively and making the present generation proud, while praying to God for abundant grace.

Dr Akinosun was accompanied by former majority leader of the Oyo State house of Assembly, Hon Kehinde Subir, Alhaji Morafa and some other APC chieftains.