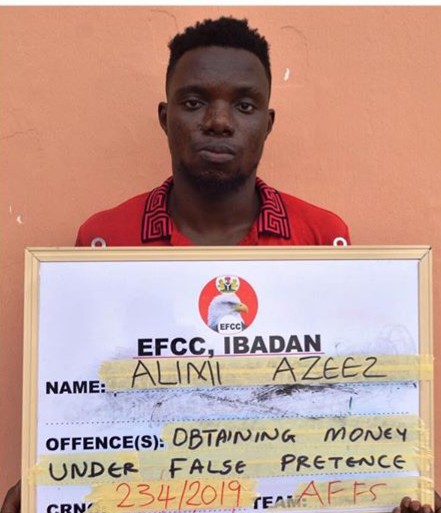 Three of the convicts – Alimi Azeez Oluwadamilare, Paul Opeyemi Omotunde and Igberase Hope Odianosen – were tried in the Federal High Court, Abeokuta Division, while the other, Okuneye Opeyemi James, was tried at the Ibadan Division of the court.

Alimi, an NYSC member, and Omotunde, a 2019 graduate from the Federal University of Agriculture (FUNAAB), were convicted and sentenced to four months in prison by Justice Ibrahim Watilat of Federal High Court 1, Abeokuta.

Also in Abeokuta, Justice Mohammed Abubarkar of Court 2 jailed Igberase for four months. The trio were re-arraigned on a one-count amended charge of criminal impersonation.

Besides sending them to jail, the presiding judges also ordered that they refund sums of money, in United States Dollars, to their respective victims as restitution.

All items recovered from them during their interrogation are equally to be forfeited to the Federal Government.

The 24-year-old was facing a one-count amended charge bordering on fraudulent impersonation. The court also ordered him to make restitution of the sum of N889,995, being benefit he derived from his fraudulent act.

He is similarly to forfeit one Iphone 7, and one Huawei handset to the Federal Government of Nigeria.

Re- Festus Adedayo’s “The Chickens Are Home To Roost”