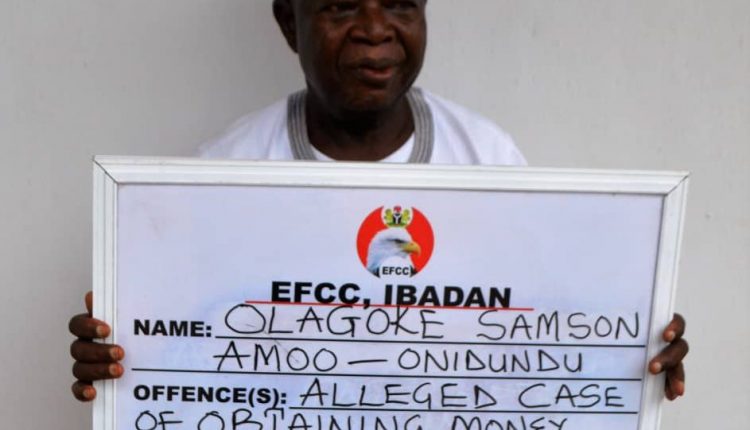 The octogenarian was docked on a four count charge bordering obtaining money under false pretence, contrary to Section 1(1)(a) of the Advance Fee Fraud and Other Fraud Related Offences Act, 2006 and punishable under section 1(3) of the same Act.

The complainant alleged that he bought four acres of land from the defendant for four million, four hundred thousand Naira, ₦4,400,000 but he was later denied access to the land by some people who claimed to be the actual owners of the land.

One of the counts reads, “That you, Chief Olagoke Samson Amoo-Onidundu on or about the 19th August, 2020, at Ibadan within the Ibadan Judicial Division of this Honourable Court with intent to defraud, obtained the sum of two million naira, ₦2,000,000.00, only from one Oluwagbemi Isaac Ashaolu by falsely telling him that the sum was part payment for the purchase of four acres of land you have secured for him, which you are in a position to deliver to him; which representation you knew to be false and you thereby committed an offence contrary to section 1(1)(a) of the Advance Fee Fraud and Other Related Offences Act, 2006 and punishable under section 1(3) of the same Act.”

He pleaded “not guilty” to the charges preferred against him.

In view of his plea, prosecution counsel, Dr. Ben Ubi asked for a date for the commencement of trial.

He also prayed the court to remand the defendant at the Nigerian Correctional Centre.

The court adjourned the case till August 9, 2021, while the defendant was remanded at the Nigerian Correctional Centre, Abolongo.

In a related development, Justice Yerima convicted and sentenced one Aremu Ridwan Kunle to six months community service after finding him guilty of a criminal charge filed against him by the commission.

Aremu was convicted on a six-count amended charge of obtaining money under false pretence contrary to Section 419 of the Criminal Code, 38 Cap. Laws of Oyo State, 2000.

He pleaded guilty to the charge.

Consequent upon the ‘guilty’ plea, prosecution counsel, Dr. Ubi prayed the court to convict him according to the terms of a plea bargain agreement earlier made with the commission.

After convicting the accused, the judge ordered him to restitute his victims: Jason Arthur, Paul Jackson and John Geditz the total sum of Three Hundred and Sixty United States Dollars, $360 USD.

The court also ordered Aremu to forfeit one black and purple coloured Techno Spark 4 mobile phone and one silver coloured HP Laptop to the Federal Government of Nigeria.