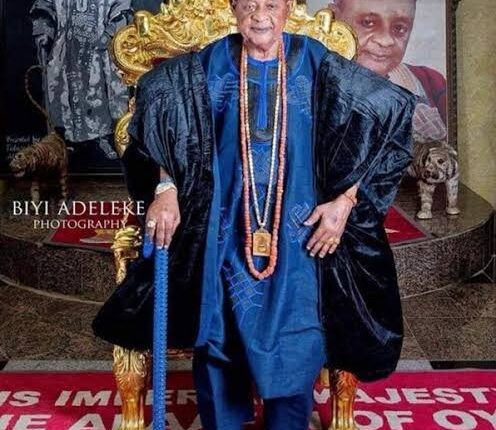 Oba Lamidi Adeyemi III, the Alaafin of Oyo has urged Nigerians to shun calls for disintegration, asked to work toward the promotion of its unity.

Oba Adeyemi III gave the advice yesterday at the inauguration of 35 classrooms at the Royal Gold Model Group of Schools and foundation laying of a mosque in Ibadan.

The traditional ruler said a lot of things had happened in the past that resulted in ethnicity and tribalism among Nigerians.

He enjoined Nigerians to find a way of reconciling one another and forget about the past, to move the country forward.

“I don’t think that separating the state is the way out, but we can restructure the country in such a way that we will have peace and tranquility and live in harmony.

“There is need to unite in order to save Nigeria from disintegration,”  Alaafin said.

He hailed the proprietor of the school, Alhaji Taofeek Akewugbagold, for promoting unity among Nigerians.

Akewugbagold, called on Muslims not to discriminate against those practising other religions.

He said: “There should be no rancour or taking up arms against one another. Every individual should be allowed to worship in his or her own ways.

The school proprietor said he would build another mosque in Lagos State to be named after Prophet Muhammed.

In his lecture, Almufty of Ilorin, Shelkh Sulaimon Onikijipa, advised Muslims to abide by the teachings of the Holy Quran and stop looking for miracle where it does not exist.

Just In : Makinde Sends Names Of Commissioner Nominees To…