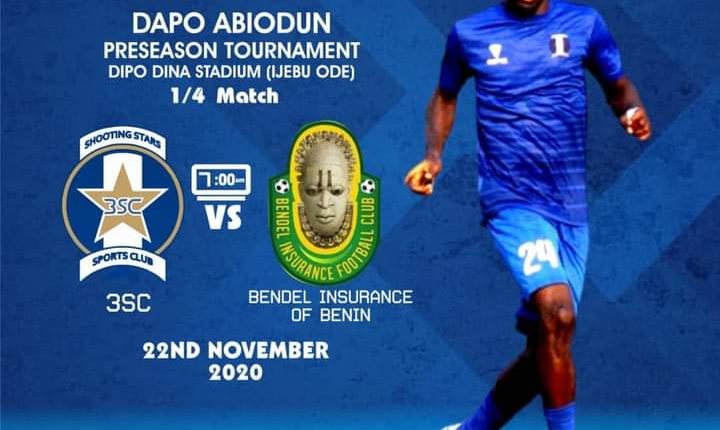 It promises to be a thrilling game as inform Shooting Stars Sports Club (3SC) of Ibadan, take on equally impressive Rivers United in the first semi final match of the second edition of the Governor Dapo Abiodun pre season tournament.

Billed for 7.00am inside the mainbowl of the Dipo Dina Stadium, Ijebu-Ode, the encounter, which could best be described as the final before final, is expected to be fierce, going by the performance of the two sides in the competition.

The coach Stanley Eguma tutored lads go into this semi final tie with an intimidating record in the ongoing tourney, having won all their matches, prior to this stage.

While they boast of a potent forward, having scored seven goals, Rivers United are very stingy at the rear, conceeding just a goal in the 2-1 quarter final triumph over MFM.

This notwithstanding, the Port Harcourt based side are in for a very difficult time against the defending champions, whose performance enroute this semi final match, is also enough to send fear down the spines of any opposition.

The coach Edith Agoye tutored Warriors are also deadly upfront, having scored eight goals, one more than their foe, while they have retrieved the ball from their net on three different occasions.

The above setting therefore points to an interesting showdown as both teams eye a place in Tuesday’s grand finale.

In the second semi final pairing, last year’s semi finalist, Lobi Stars will aim for an improved outing this term as they face Kwara United of Ilorin, in an encounter that is scheduled for 4.00pm.

Following their CAF Confederation Cup engagement this weekend, Rivers United have communicated to the Organizers of the 2020 Dapo Abiodun Cup their management decision to disengage from the pre-season tournament.

Rivers United will travel to Equatorial Guinea this week as they begin their 2020/2021 CAF Confederation Cup campaign in the Preliminary round against Futuro Kings on November 28th.

According to the club’s official communication to the organizers of the Dapo Abiodun Cup, Rivers United General Manager Chief Okey Kpalukwu explained the reasons behind his team disengagement from the prestigious pre-season tournament.

“We want to apologize to the organizers of this tournament, our decision to disengage from the tournament was a difficult one. We have to travel back to Port-Harcourt and conduct the COVID-19 test for our players and officials. We have to perfect our travel plans and make arrangements for all necessary documentation.

“We appreciate the Organizers for their amazing support for our team final phase of preparation, we got a good grass pitch to train in Ijebu-ode and the competition from other teams in the tournament has helped our coaches to perfect the team ahead of our continental games. We are grateful for the opportunity and we will participate in the future tournament,” said Kpalukwu.

The Tournament Coordinator, Oye Bawala appreciates the NPFL side on behalf of the organizers and wishes them a successful season.

“We appreciate Rivers United for honouring our invitation, they added glamour to the tournament and we commend their sportsmanship behavior all through the tournament. We have accepted their decision, our objective with the tournament is to create a good platform for the clubs to perfect their preparation ahead of the new season and we are glad Rivers United have benefited hugely.

“We wish the team success in the CAF Confederation Cup, we are hopeful they will make Nigerians proud and give their best against Futuro Kings this weekend,” said Bawala.

Rivers United defeated MFM FC on Sunday in their quarter-final game to set up a semifinal fixture with Shooting Stars who defeated Bendel Insurance 2-1 in their own game.