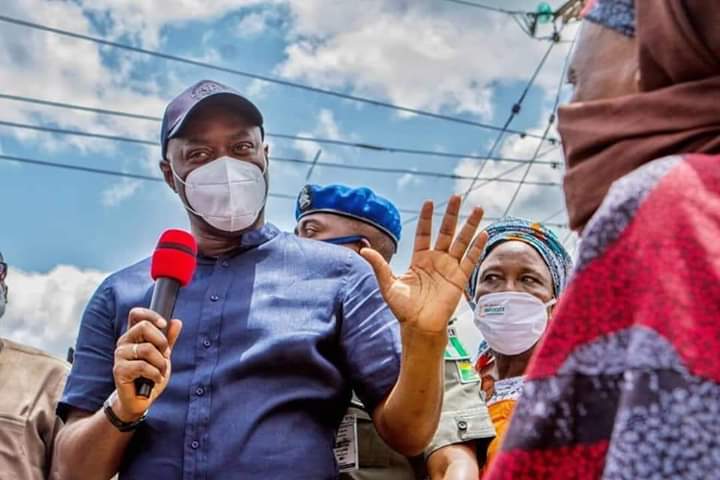 The Oyo State government has called on security agencies, traditional rulers and other stakeholders in Oke Ogun area of the state to cooperate with it to halt the entry of illegal migrants into the state amidst the ongoing fight against COVID-19.

The media component of the Oyo State Task Force on COVID-19 led by the Commissioner for Information, Dr. Wasiu Olatubosun, made the plea during a sensitization drive on the COVID-19 pandemic in Oke Ogun axis of the state.
The commissioner, who made the call at the weekend in Oorelope Local

Government, stated that the concerted efforts of the stakeholders and the state’s security architecture in border towns and villages were necessary to prevent illegal entries, which might pose threat to public health.

Olatubosun, who led members of the committee as well as officials of the state’s Emergency Operations Centre (EOC) on a week-long sensitization campaign to Oke Ogun zone, maintained that both conventional and non-conventional security apparatuses were important in the bid to check illegal entry into the state at this period.

A statement by the Chief Press Secretary to Governor Seyi Makinde, quoted Olatubosun as saying that all hands must be on deck in the bid to stop the spread of COVID-19 in Oyo State, adding that the Task Force under the leadership of the governor was doing everything possible based on logic and scientific advice from experts in the Task Force, to put an end to the situation.

Olatubosun also maintained that the sensitization campaign, which began on Thursday and is expected to cover Oke Ogun and Ibarapa zones, was targeted at enlightening the people of the areas on how they can prevent COVID-19, adding that apart from sensitization, the state has also been distributing nose masks to residents of the areas.

The commissioner as well as Mrs Adekunbi Oladipo, a member of the Nigeria Red Cross Society, representing the Risk Communication Pillar of the EOC, visited markets and palaces of traditional rulers in the local government, enlightening the people and distributing nose masks produced by the state’s COVID-19 Task Force.

They called for adherence to all the directives issued by the Task Force, including physical distancing, washing of hands and use of sanitisers as well as wearing of nose masks.
Speaking on why it is important for all stakeholders in Oke Ogun to work together to check illegal entries into the area, Olatubosun noted that the area has many border towns and villages, which share boundaries with neighbouring Kwara and Niger states as well as countries like Togo and Benin Republic, among others.
He stated that in order to check the influx of people who might have contracted COVID-19 into the state, it has become imperative for all stakeholders to work together, emphasizing that both conventional and non-conventional security agencies have roles to play in stopping the illegal immigration by foreigners who might want to come to the state through the borders.
He added that since the local security men are the ones living in the various communities, they therefore, have important roles to play.
He also stated that other people working and living in the border communities would have to join hands with security agencies and the government.
Olatubosun said: “In Oke Ogun here, we have inter-state and international borders. We have at Kisi, Saki and other areas. So, what we can do is to strengthen the security, sensitize community leaders, traditional rulers to help us work in synergy with the conventional security. Let’s get vigilante groups, hunters that will form non-conventional security. It is the non-conventional that can determine what and how to curb the migrants.
“At times, such migrants take bush paths and it is only those are natives of an area that can track the illegal entrances using their native intelligence.”
The commissioner said that the government has equipped the conventional securities and that the local security have been helping the situation, citing the case of the migrants from the norther part of the country who were tracked down in Ogbomoso.
Olatubosun, who maintained that the feedback from communities in the state was favourable, saying the COVID-19 Task Force has released the phone numbers of the EOC, which he said can be reach by all.

Yoruba In Diaspora Back Sunday Igboho, To Mobilise For South…

LG Polls In Oyo : Election Results Of Some LGs