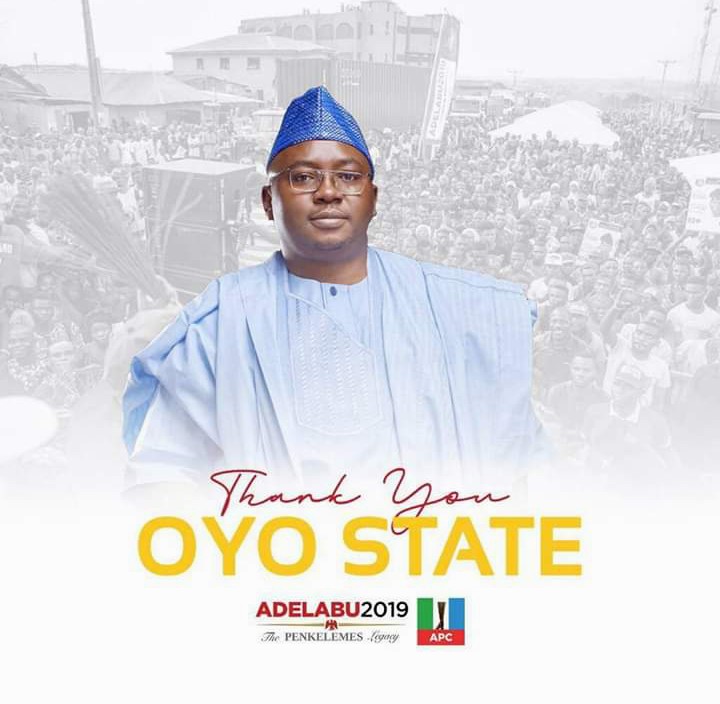 Oyo APC gubernatorial candidate in last governorship election, Chief Bayo Adelabu has displayed a spirit of sportsmanship by congratulating the south west ministerial nominees and Oyo own Sunday Dare on their nomination.

Despite the omission of Chief Adelabu name on the ministerial list as many believed he deserved after losing out the governorship battle to governor Seyi Makinde, the Penkelemesi sustainer proved to be a thankful gainer in APC last administration at the federal level so, welcome the idea of giving more party loyalists to serve the Southwest zone and Oyo state at the federal level.

In his congratulatory message, he said, ” I wish to congratulate all the ministerial nominees as contained in the President’s letter to the Senate today. I’m particularly happy for our party members and leaders from the southwest zone nominated to serve in the President’s cabinet during his second tenure in office. These are Mr Sunday Dare, Alhaji Rauf Aregbesola, Mr Babatunde Fashola SAN, Otunba Niyi Adebayo, Dr Olorunnibe Mamoora, Arch. Olamilekan Adegbite and Chief Tayo Alasoadura. Your nominations are all well deserved and professionally diversed as you have all distinguished yourselves in your various chosen fields. I am convinced you will all use your expertise to contribute to the economic growth and development of Nigeria as a whole and South west region in particular and consequently better the lots of the common man. I want to remind you that Nigerians’ performance expectations of you are very high and i plead with you to ensure those expectations are not only met but surpassed. I wish you all successful screening and confirmation by the Senate.

” I also use this opportunity to plead with all our teeming supporters and generally, members of the APC in Oyo state to keep your calm and rejoice with our new ministerial nominee for Oyo state, Mr Sunday Dare, and I implore you all to give your support to him to enable him succeed in his new role. Mr Sunday Dare is our brother, an accomplished journalist and party faithful from Ogbomosho who has in his own little way been contributing quietly to the success of our party APC, both at the state and national levels. Therefore, his nomination for the ministerial position is highly welcome and deserved and I hope he will use the office to benefit the party and contribute his own quota to the reconciliation process about to begin within the APC fold to enable us have a stronger and more formidable party ahead of 2023 general elections. I plead with all of us to give our support for him to succeed.

” To those of our members that were expectant of my nomination as a minister, you should please not be bothered or dissappointed or brood over nothing as ministerial role is by appointment and not an election nor a compensation for electoral loss. A lot of people are qualified to be so appointed and a lot of interests would also be considered in the selection. What matters most is for the party to have a competent nominee whose tenure will be beneficial to the party and its members and improve the party’s performance reputation ahead of future elections. I have had a good share of federal government appointments since 2014 when I was appointed the Deputy Governor of the Central Bank of Nigeria and automatic directorship and chairmanship of AMCON, NIBSS, FITC and NAIRSAL. It’s just fair to let others have a shot at it provided it’s all about serving the people. I didn’t resign my lucrative job to chase a ministerial appointment again but to seek election as the executive governor of the state which is not yet foreclosed given the advantage of my age, another election in 2023 and hopefully a success at the ongoing election petition tribunal case. And I’m happy to let you know that we are making good progress at the tribunal which we hope to follow to a successful conclusion. And of course, 2023 is just a couple of years away when we still have another opportunity at the polls.

” As it is now, we should focus on strengthening the party through genuine reconciliation among aggrieved members, encouraging emerging new party leaders to give their best in supporting members and providing constructive, objective and formidable opposition to the ruling party at the state level.

” I want to thank our dear President and all APC party leaders for the wise choice of the ministerial nominees representing the southwest zone and wish all the nominees nationally, a successful tenure. Once again, Congratulations to you all.