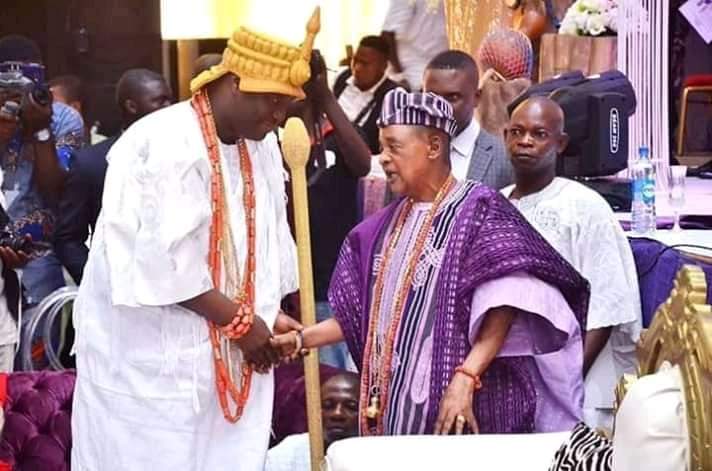 SCRIPT OF THE LETTER PUBLISHED IN THE NIGERIAN TRIBUNE ON THURSDAY, 2 MAY, 2019 PAGE 9

In recent time, I have been inundated with calls and even visits to my Palace on a recent Video Tape showing His Imperial Majesty, Oba Adeyeye Enitan Ogunwusi, the Ooni of Ife during the Aje Festival in Ile-Ife, Osun State. With all sense of modesty but candour, I cannot recall exactly the number of the video tapes that have been sent to me by well-meaning Yoruba elders and patriots.

(2) In the same vein, the traditional rulers have not been left out of this concern and legitimate worries. All across Yoruba speaking areas of Nigeria up to Kwara and Kogi states, the situation to say the least, has been breathless. Even the Yoruba in the Diaspora; Republics of Benin and Togo, Brazil, Cuba, Chile, Ecuador, United Kingdom, United States of America, Canada etc have also expressed indignation about the current issue.

(3) Initially, my reaction was to stand by my age long resolve, as the king and Head of Yorubaland, not to interfere in the running of the affairs of other Paramount rulers in Yorubaland of which the Ooni of Ife is one. But after listening thoroughly with meticulous assessment and analysis of the tape, I did not hesitate to come to the conclusion that the time for me to interfere was ripe and absolutely expedient less the cherished historical and cultural heritage of the Yoruba is wantonly dragged in the mud. My interference, therefore, is daintily anchored on the sanctity of Yoruba history, origin and custom which I am convinced the said video tape by Oba Enitan Ogunwusi did not observe.

(4) Yet, even in my response, one should be cautious enough against any inter ethnic hostility and malice within Nigerian context, especially between Yoruba and Igbo. But this should not be turned into historical fallacies. I doubt if any Igbo man familiar with the history of his origin will be happy with the fallacious claim that they originated from Obatala.

(5) Also I do not think the Igbo with a record of highly respected origin will feel comfortable after tracing their origin to ancient Israel with lineage to Eri, the fifth son of Gad who was the seventh son of Jacob, who was the youngest son of Isaac, son of Abraham. Eri, the son of Gad was said to have entered the present Egypt, journeying down Africa, crossing the Nile to Ethiopia (present day Sudan) and finally into the present day Enugwu Aguleri (for more details about this see: THE BOOK NIGERIA 2.O. CARAPACE PUBLISHERS NIGERIA LIMITED. Pg 46 ORIGIN OF THE IGBO: OBU GAD (HOUSE OF GAD) ANAMBRA STATE. Khartoum Street, Wuse, Zone 5, Abuja Federal Capital Territory, Nigeria or www.dayoadedayo.com). Certainly, the Igbo people who are proud of their origin will not feel comfortable with any pseudo history that will make them superior to Israel.

(6) I am not aware of any business relationship between the Yoruba and the Igbo until the 19th century, leading to the amalgamation of the Southern Protectorate and Northern Protectorate that resulted into Nigeria in 1914. In other words, we are related as fellows Nigerians who have been enjoying mutual relationship for each other. Culturally, linguistically, traditionally and historically, we are basically different. We have always striven to promote harmonious understanding in our diversities.

(7) AJE Coming back to the origin of Aje – Commerce, the cowry (Owoeyo) had been the Yoruba medium of exchange long before the Europeans came. Hence the decoration of Sekere drum with cowries in appreciation and honour of Aje deity it is to say the least, instructively abominable for anybody, no matter how highly placed to put any tribe above the Yoruba race as far as legitimate trading business is concerned. This is because Aje remains one of the early deities of the Yoruba whose imagery creation is the popular Sekere music played everywhere in Yorubaland.

(8) Alaafin Onisile 1738 – 1750: Alaafin Onisile was remarkable for his indomitable courage and lion-hearted spirit. He was moreover very artistic, and was said to have made seven silver doors to the entrances of his sleeping apartment. During his reign, the Sekere (Calabash) drum was ornamented, not only with cowries, but also with costly beads e.g. Iyun (Corals), Okun (Stone beads, Benin), Erinla (stripped yellow pipe beads) and Segi (blue pipe beads), strung with silk thread dyed red; all of native manufacture. He was a great warrior and for his exploits was nicknamed “Gbagida! Wowo I’ewon ab’esin fo odi (Gbagida, an expression of admiration), a man with clanging chains (for prisoners) whose horse can lead over a town wall). The History of the Yorubas. Pg.176 by Rev, Samuel Johnson.

(9) Besides, some families in Yorubaland are classified adherents of Aje deity. Some of these families named their children in honour of their chosen deity, i.e. Aje. Such names include: Ajebandele, Ajewumi, Ajifowobaje etc not to talk of those who dedicate time to worship the deity.

(10) It is also a truism that some cognomen, lineage panegyric, such cognomen include: Aje ti so eru d’omo. Yet another is special request and plea to Aje such as “Aje dakun ma na mi ni pasan re ko se nani” and many others like that.

(11) Coming back to modern trade, I make bold to say that it was the imitative of Alaafin who opened the Yoruba to Trans-Sahara trade with West African Countries as early as the fifteenth century. This was especially between the Yoruba and the Hausa-Fulani across West Africa. Trade routes led from Timbuktu in Mali, Goa, Tuareg and Tripoli. Still as far as (Oceanic) Coastal trade was concerned, the Alaafin used the Port of Allada in Wema to control European shippers. “By the middle of the 18th century, when Oyo had grown into an empire in the full bloom of life, Oyo was bounded to the north by the Niger, to the West by Modern Togoland, to the east by its sister Kingdom of Benin and to the South by the Gulf of Guinea, and Porto Novo and Badagry were its main coastal outlets. Dahomey, it may be recalled, became a tributary state of Oyo in 1730 see: Topics in West African History, pg. 90 Paragraph 22 by Adu Boahen, Ph.D. Associate Professor of History, University of Ghana. Published by Longman Group Limited, London 1966.

(12) One other imperative of Yoruba in the pursuit of commerce is that any such pursuit must be legitimate with norms of the society. It is on this note that Yoruba sweat and labour as necessary partners; Yoruba do not encourage cheating and unlaboured wealth. Yoruba work very hard to be wealthy.
“Ise ni Oogun ise
Eni ti ise nse
Ko ma bo orisa
Oro kokan torisa
Ibaa bo orisa
Ibaa bo obatala
O di ojo ti o ba sise ko to jeun”

(13) The above quotations underscore the fact that the Yoruba are very industrious from the beginning with strong emphasis on legitimacy. We have such wealthy and successful businessmen in Lagos who invested heavily on the education of their children. Few examples would suffice. For instance, in 1884, Obadia Johnson, a Yoruba qualified as a Doctor of Medicine. John Randle, son of Thomas Randle an Oyo man who settled at Aroloya in Lagos qualified as a Doctor in 1888, followed by Orisadipo Obasa in 1891. Sapara Williams became the first Lawyer in Nigeria in 1888. In 1893, Herbert Macaulay, a Yoruba man, became an Engineer and A. Agbebi followed in 1911.

(14) Earlier on a Primary School had been established in 1842 in Lagos by the Missionaries. The CMS Grammar School was established in Lagos in 1859 by T.B Macaulay who is the father of Herbert Macaulay. The Methodist Boys’ High School followed in 1876 and in 1879 Methodist Girls’ High School, 1881 St Gregory’s College, Lagos and in 1885 the Baptist Academy (see J.F. Ade Ajayi “The Development of Secondary Grammar School Education in Nigeria, pg 523.

(16) In summary, let it be stated that Nigeria, despite the multiplicity of its ethnicity has been together in harmony in spite of their heterogeneity. All of us leaders should guide against any utterance that can create an atmosphere of suspicion and rancor among the various ethnic compositions.