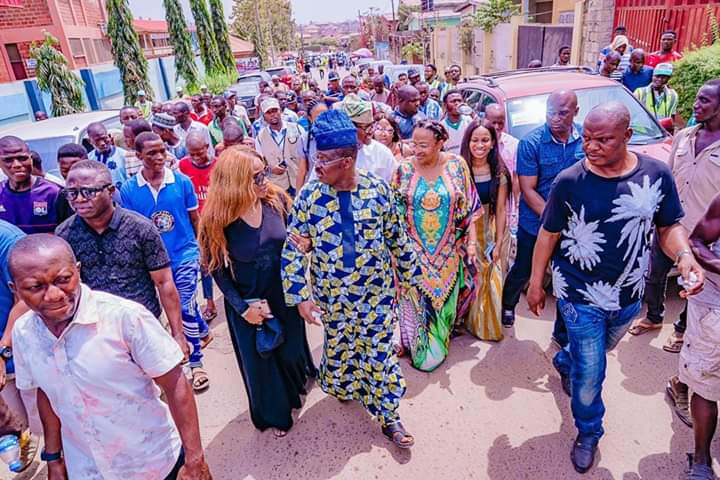 Oyo South Senatorial District candidate of the All Progressives Congress (APC), Governor Abiola Ajimobi, has expressed satisfaction with the conduct of Saturday’s election, describing it as credible, peaceful and relatively hitch-free.

He said this during an interview with journalists shortly after casting his vote in company with his wife, Mrs Florence Ajimobi, children and sons-in-law, at Ward 11, Unit 20, Oluyole Community Grammar School, Oluyole Extension, Ibadan.

With the benefit of hindsight, the governor said the election was the best he had witnessed since he joined politics.

In his general assessment of the election, the governor said that the conduct of the election was a marked improvement from the past exercises, apart from reported cases of late arrival of polling materials in few polling units across the state.

The governor said he was particularly impressed by the large turnout of voters, especially youths whom he said had, by their actions on Saturday, demonstrated their resolve to assume leadership positions.

He said: “I’m impressed with the conduct of today’s election which I can confidently say passes the litmus test of freeness, fairness and credibility. I congratulate the people of Oyo State for turning out in large numbers to exercise their franchise.

“The atmosphere in this polling unit is that of conviviality. We are all laughing and smiling at one another. The faces I see here are the faces of people who are happy and satisfied with this election.

“From what I have seen here and the reports I have received so far, the election is hugely successful and credible. The few cases of late arrival of electoral materials were later resolved.

“Not minding whether they are voting for our party or not, the voters here received me and my family warmly and you can see all of us throwing banters. I must tell you, this is another achievement of our administration. I did not hear any case of brigandage or violence so far.

“You will know the type of government in power by the people’s attitudes during elections. Today, generally, the election has been conducted in an atmosphere of peace, which is a thing of joy to me. What this means is that our government has enthroned peace in this state.”

He enjoined the people of the state to maintain the orderliness, peaceful conduct and large turnout in the March 9 gubernatorial and House of Assembly elections.