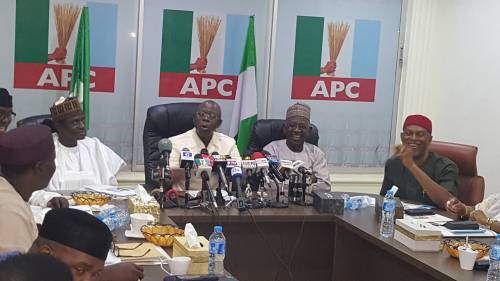 The sun state chapter of All Progressives Congress (APC) has
rejected the verdict of Osun Election Petition Tribunal that declared Sen Ademola Adeleke of the People Democratic Party, winner of the Sep 22, Governorship election.

Barr Kunle Oyatomi, the party Director of Publicity, Research and Strategy confirmed in a statement available to journalists in Osogbo on Friday confirming the disapproval of the party on the tribunal verdict and the APC readiness to appeal the judgement.

“The APC has rejected the Election Petition Tribunal verdict that declared Adeleke the winner of the 2018 governorship election in the state.

“The verdict cannot stand superior legal scrutiny. Therefore we will appeal against it”

It will be recalled, the Osun Tribunal sitting in Abuja on Friday nullified the victory of Governor Gboyega Oyetola of All Progressive Congress in last year August 22nd Osun governorship election and declared Sen. Demola Adeleke as the authentic winner of the election after the cancellation of 17 polling Units.